A Truck Full of Zombies - The Walking Dead Episodes 9 & 10


So let's sum up the last two Walking Dead episodes (The Suicide King and Home) this way: 1 hour and 45 minutes of DUMB and 15 minutes of such sheer BRILLIANCE that it makes up for previous stated DUMB.

After lulling us into a state of aggravation and boredom with the dumb (seriously, I was getting Season-2-in-the-abandoned-church-in-the-middle-of-the-woods-looking-for-Sophia aggravated. Wait, that might not be fair... I don't think I was ever as aggravated as watching The Suicide King.), that single shot out of nowhere hitting Axel as he's talking to Carol was fantastic! We all knew The Governor was coming, although it seems like Hershel was a little slow on that concept, but I just love the suddenness of that scene. No forewarning, no long shots of The Governor driving towards the prison, just blam - Axel down! (Here is where we should talk about "why weren't they better prepared for an attack? why did they think they had so much time? why was no one on lookout?" etc. but that's all part of the dumb and I will save all that for my List of Gripes below.) And then it was blam blam blam - Hershel is in the grass! Rick is outside the gate! The Governor was gleefully just raining bullets onto them! And THEN THEY DROVE A TRUCK FULL OF ZOMBIES INTO THE PRISON! Two-fold terrifying awesomeness here because there's truckload of zombies in the prison but also the gate is now demolished. These last 15 minutes of Home hopefully will set the tone for the rest of the season and the pace will stay steadily manic, just how we like it.

Before we get to my List of Gripes (also known as The Dumb), let me assure you that I understand the context of where we are/were in the show as of last week: Even though we (viewers) got a big break, time hasn't moved on for our survivors. The baby is only a week old we're told! So, yes, I get it: in the context of the show, Lori JUST died, Glenn and Maggie were JUST saved and Rick probably hasn't slept in 100 years. But why come back to us with a sluggish, seemingly contrived character set-up for many of our friends (I'm looking at you Andrea!)? Hindsight is 20-20 I guess and you could argue that the entire The Suicide King episode was solely to set up the last 15 minutes of Home, but I must point out the following Gripes:

Andrea
I mean, seriously... what the actual HELL is going on here? Are we to believe that she is so blinded by finding comfort in a walled community and in the arms of some dude that she will turn a blind eye (no pun intended) to the depravity that surrounds her at every turn? Let's take stock for a minute...  what does she know? By my calculations she has seen The Governor's zombie heads, seen the little zombie girl he locked up, she has Michonne telling her he's awful (and she SHOULD trust her more than anyone), she has witnessed more than one pit fight, including one that set Daryl against Merle...with zombies! She now knows that Maggie and Glenn and Daryl were all there and The Governor didn't tell her. So this all rolls up to "get me the hell out of here!" right? Somehow, no. Somehow this results in her immediately telling The Governor not to push her away and then becoming the worst soliloquy deliverer de facto spokesperson for the Woodbury community. Barf. I suppose it's telling that she didn't put a bullet in that guy's head before The Governor did. Old Andrea wouldn't have hesitated for a second. I know the show wants us to see that she's getting too comfy, and I could buy that if she was more sheltered from the shit she has seen, but given what we know, I have to interpret this as D-U-M-B. Andrea better wake up superfast, or is our kick-ass Andrea becoming the new *gasp* Lori?

Michonne
I am so frustrated by how the show is portraying Michonne. Yes, yes... she is soooo independent. She keeps to herself. She doesn't trust anyone. Okay already. Can she at least say three words? Like "I know Andrea" would have been helpful before Merle said it. And as I said before, I get that Michonne is still 'new' to the team in the context of the show, but haven't we spent enough time with her character that she can, you know, open up a little bit? Especially with Rick. I understand that Rick is "walking Crazytown" (Glenn's words), but he should be able to see by now that Michonne knows what's up. She brought baby formula! It's hair-pullingly frustrating to watch her not speak. And ridiculous at this point.  Get on with it! I have to say, however, that I was encouraged to see in Home that she talked about what she knew about The Governor (heads as trophies, etc.) and I was getting psyched for the Glenn-Michonne attack plan, but alas, The Governor beat them to it.

Rick's Psychotic Episode
I just don't even know what to say about this one. I guess in hindsight maybe the show felt they needed this to get Rick outside the gates when The Governor attacks? But damn this is so contrived and for me, totally unnecessary (I mean he could have been outside the gates for some other reason). And as far as trying to show us just how damaged Rick is, yes, yes, Rick's mind is exploding. He has a new baby and a dead wife. Psychotic break and all that. We got that from the telephone. But actually showing us Ghost Lori in a white dress flitting about the forest? BAH! I say BAH! I mean chuck-something-at-the-TV BAH! 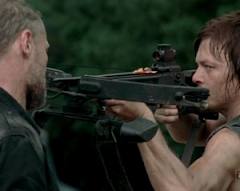 I haven't even talked about Daryl and Merle yet! The fact that Daryl chose to go with Merle broke my heart. Yeah I got it, he had guilt about leaving him on the roof and big brother stuff, but ugh... how horrible. So to see Daryl wake up to himself in the woods and give that nasty Merle what-for, that was solid character development there. Aside: clever visual clue that Daryl was starting to trust himself more when Merle is telling him that the river is not whatever river Daryl said it was, and then we see the sign that it is. So what are they going to do with Merle now, now that he's essentially helping to save Rick from zombies? My guess is lock him up in a cell, if they even let him in at all. I still think this is all part of The Governor's plan to get Merle into the prison and then Merle takes them out from inside.

Other Stuff:
- I'm not sure how to feel about Glenn and Maggie. I am thoroughly enjoying raged-out Glenn and he has every single right to be. I don't get the Maggie part of making what happened with The Governor somehow come between them. But this all seems to be resolving itself anyway.
- I wonder if Tyrese and his clan hear the commotion and come back to help out?
- Poor Carol! This chick has endured some shit, amirite? Abusive husband, dead zombie daughter, Daryl chooses Merle over her (essentially), and the dude who's kind of into her drops dead right next to her (although she uses his body as a shield so that's good). I wonder how she'll respond to Daryl coming back? In her speech to Beth (aka the only one who takes care of that baby!), she says she feels like she's a different person, but if Ed came through the door, she'd like to think she'd kick him out but she's not sure. Is this foreshadowing that she is going to distance herself from Daryl? Or is this clever symmetry that Carol is musing over her abusive relationship at the same time Daryl is essentially coming to his own realization that the abuse he endured will not define him any longer? I hope for the latter and that these two will be BFFs again.
- Was anyone else hoping that Hershel had some sleepy drug up his sleeve that he would just inject Rick with to make him sleep. Don't they know that a nice nap makes everything better? No naps for these peeps for a long time now.

What do you think of Rick's psychotic break? Is Ghost Lori just too damn much? What will they do with Merle? Will Andrea wake up and start kicking ass or what? Does anyone even know/give a crap what Carl is doing anymore? Break it down for me in the comments!