The Watching Dead - The Walking Dead is Making My Brain Mushy

TVisAwesome is back and better than ever! Man, I love this blog. But my former format, while awwwwesommme and thoroughly rewarding, was a lot of work. A lot. SO now we are entering TVisAwesome version 2.0: same awesome, now in bite-size bits! Sometimes, like this entry, I'll go a little longer. But I envision some fast blast entries just so I can get some things out into the world. Let's see how this goes. (Ed. Note: Now that I have re-read this entry, I see that it is exactly like everything I've ever done. So bite-sized versions will be soon, rather than now. Carry on.)

I watched the last four episodes of TWD all in a row last night (yeah!). And here is what's clear: while still amazing, wow was it getting sluggish and dare I say, boring? I'll tell you how I know some parts were slooowwww: I WAS FAST FORWARDING THROUGH PARTS OF THE SHOW. I never thought I would say those words. But there I was, with my finger on the button, saying to myself "yup, still walking on the tracks... still walking on the tracks."  Good grief, enough of the character development! Let's move some things along here! Having said this, some of the backstory has been good: Carl is growing before our eyes and we needed to see how his emergence into adulthood would transpire (typical teen angst + pudding, evidently), and the Michonne flashbacks were interesting and... let me check. Nope that's about it. We already know all about Daryl and his history and he's a tough guy with a warn heart yada yada yada. We already know that Beth-girl believes that people are good, or some bullshit. The entire episode about Bob (we don't care about his back story - fast forward) and Maggie and Sasha could literally have been 10 minutes. I guess we learned some new stuff along the way, like peeps going to D.C.,  a gang of ne'er-do-wells roaming around and of course, Terminus.

But I change my tune when we get to last week's episode: the entire episode was a masterpiece. A devastating masterpiece. Slow? Maybe. But the layers of what's happening in this episode blows away any "let's just live up high somewhere" or "Daryl, y u so ornery" back-and-forth from the previous episodes. This episode painfully exposes where everyone's mindset is now. In a nutshell, the world is shit and there are no easy answers and sometimes the people are scarier than the zombies. Mika is very certain that she can kill walkers but not live people. "Never" she says. Carol says "but what if they're trying to kill you?" Damn fine foreshadowing if I ever saw it... in two ways: poor Mika gets killed in the very way Carol was trying to warn her about, and Carol has to do what Mika said she never would. Excruciatingly well crafted, this episode was riveting and I cried so hard for so long, I could barely see by the end. The opening scene, with it's idyllic kitchen setting and lace curtains, offset by what we learn is Lizzie playing with her friend Iwanto Eatu, was so jarring that I rewound it twice (I was sure I had missed some type of context for this). By the time we get to that actual scene in the show, all bets are off with Lizzie. But  nothing could prepare us for the actual sight of Lizzie, hands dripping with blood, a stabbed and dead Mika behind her, and baby Judith on a blanket. She is one messed up little girl, and we all know what has to happen. I suppose the part Tyrese plays in agreeing with Carol that Lizzie needs to die (because "she can't be around people") somewhat lessens the second blow to him that day: when Carol reveals that it was she who killed his love Karen. As Tyrese says, Carol feels the heaviness of what she did and it will be with her forever. (We know this awareness is a recent development for Carol - that she only feels the full impact of her actions now that she had to kill Lizzie). In one of the best, most poignent scenes of the year, over puzzle pieces and a gun, Tyrese forgives her.


The struggle of finding normalcy in this screwed up world is an ongoing theme with TWD, and ever more so this season. What I find interesting this season is how the show continues to demonstrate that pre-zombie normalcy (this idyllic little house, the house where Daryl and Beth were (normal for Daryl), the funeral parlor, a place up high for Sasha, even the great set up at the prison) is ultimately unattainable. Which I get. But for some reason, it's almost like the desire for normalcy is pitted against the desire to be with other people. Like it's one or the other, and somehow the people win out. Sasha voices this most clearly: "what the hell are we doing out here? Let's just find someplace up high and find food and forage, etc." Why is that a crazy idea? The show itself seems kind of inconsistent in what it thinks, too. In the most insane debate, Bob says he needs to go with Maggie because "she's all alone," leaving Sasha... literally all alone. Um, what? In the end, I don't think the show is necessarily thinking some of these discussions through, and they're probably not trying to convey some big life lesson. They're just trying to get these peeps to Terminus. That's where the good stuff is gonna happen. I bet.

Other Stuff:
- I was just thinking of what it's gonna be like when everyone gets to Terminus. Rick told Carol she couldn't be with the group because he couldn't let her near his kids. Well, there's some irony now.
- I appreciated this Lizzie storyline for being a pick-up from the comic, although not directly (in comic, it's actually Carl who steps up and takes out psycho kid). It's pretty genius how they get some comic stuff into the TV show in different contexts and with different characters and have it make an impact. 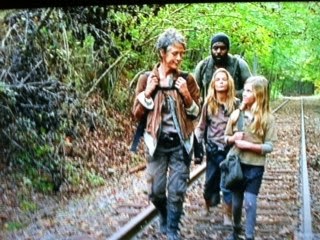 - where's that baby? Yeah, yeah... she's probably in a backpack on Tyrese's back, but this was a long scene with no baby and I swear Tyrese turns and I couldn't see anything. Anyway, how lucky is everyone that Judith is a dream baby without colic, or hunger pains, or ear infections, etc.
- One overall thing that's been bugging me this season: While the gang was still at the prison, a really big deal was made about Daryl, Michonne and others going far and wide to scavenge, report back, etc. After the prison, with a weak Rick so you know they didn't go far, how the heck had no one been to that cafe place? how has no one seen Terminus signs before? what kind of trackers are these people? Where did they go all those months? I mean, besides the vet hospital, I guess.

ok...In response to your last point. I think some of these places were known (not the funeral home) but, when Beth wants a drink Daryl knows where to take her (so she doesn't drink no schnapps) and Michonne kind of gave up on things and wandered but once she decided she needed people, it didn't take her long to find them (it seemed like she knew there were homes around and that was were folks might be.)

And this going far to scavenge...I thought they got pretty cozy with their prison farm and maybe didn't. They didn't think to go get meds until they needed them (bad planning) Hell Remember Rick left food on the vine when he and Carol went looking at one point? (bad planning)

They are also crossing each other's paths throughout these episodes (the shoes, the smoke from the fire Beth set, Rick's bad guys find Daryl... etc). I think they are (maybe) showing us how literally lost they are without the group and it is like they are walking around in a fog...but how long has it actually been? 3 maybe 4 days?

AND WHY DID THEY NOT HAVE A MEET UP PLACE IF THEY HAD THE BUS PLAN?

I love the character development episodes...but these folks SUCK at preventative planning.

I would probably agree about the slowness if I watched more than one episode at a time. Last episode was awesome though.

Still there has been one thing that I have found befuddling all season long - why has no one questioned that the redneck with a mullet who can't read a map is a brilliant scientist??! Does the rest of America not realize that our scientists in the south are smart and nerdy just like yours, and under no circumstances, even in zombie apocalypse would the wear a muscle t-shirt and wear a mullet??

I would probably agree about the slowness if I watched more than one episode at a time. Last episode was awesome though.

Still there has been one thing that I have found befuddling all season long - why has no one questioned that the redneck with a mullet who can't read a map is a brilliant scientist??! Does the rest of America not realize that our scientists in the south are smart and nerdy just like yours, and under no circumstances, even in zombie apocalypse would the wear a muscle t-shirt and wear a mullet??