Poor Edith is the Name of My Band... and Other Downton Abbey Things 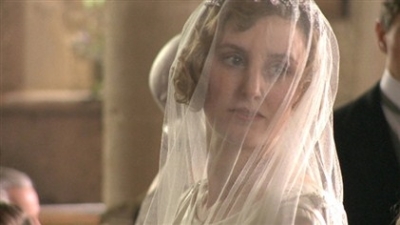 Poor Edith!  I mean, POOR EDITH! I knew something was going to go awry with Edith and her bliss, since I had read some spoilery things in Entertainment Weekly and other places. I thought perhaps our Sir Anthony would possibly have a heart attack or die in some horrible way soon after the wedding. Then as I was watching the latest episode (Season 3, Episode 2), I thought he might have a heart attack right there at the wedding, given how absolutely pallid he looked. NEVER, let me repeat, NEVER did I think he would leave her there at the alter! Did anyone think he had the fortitude to do such a thing? Especially since Edith looked the best she ever has and her dress was much more gorgeous than Mary's? (There. I said it. Truth!) I suppose that goes to his character, sort of not being able to stand up for himself and then making the worst possible decision at the worst possible time. (I'm actually not sure that we've seen evidence of this in the past, but but his overall weakness to others seems to indicate he may have made some bad decisions in the past. I bet.) Such a credit to Downton Abbey that even when I read spoilers, I'm still shocked at what happened. Also credit for making me actually weep for Poor Edith, when, you know, she can be kind of a bitch. 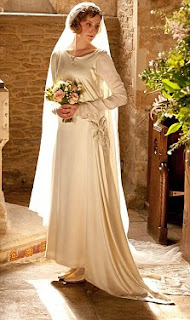 So now what? I'll tell you this: Lord Grantham better Buckle.Up.Fast. If Lady Edith was bitter, biting and spiteful before, you better believe our new Super Spinster Lady Edith will be x100 and will give even Lady Dowager a run for her money in the blunt irreverence category. Absolutely zero fucks will be given by Super Spinster Lady Edith. And I can't really blame Edith for what's about to come Lord Grantham's way... he definitely was the cause of this. As much as I was frustrated by the Mary/Matthew business of customs and how a Lady has to marry someone of means, etc. this bit about Edith not being able to marry Sir Anthony because of his age and his disability seems outrageous. (Aside: I love the way Edith handled the first separation, telling Lord Grantham: "Sybil runs off and marries our chauffer..." etc. and gets him to change his mind. Bravo, Edith!) Also, isn't there quite an age difference between Lord Grantham and Cora? (Must research.)


Scene 1
Cora:  "You are being tested. And you know what they say, my darling. Being tested only makes you stronger."
Edith: "I don't think that's working with me."

Scene 2
Anna: "What would you like me to get you?'
Edith: "A different life."

In other news, I'm certainly not in love with this story line of Anna and Mr. Bates, with Mr. Bates seemingly becoming a hardened man in jail. On the one hand, I do enjoy their meetings - they are so perfect for each other! And I definitely like the fact that Anna is not giving up and is going to do her own search to try and clear Mr. Bates. However, I feel like Anna might be a terrible investigator. She doesn't seem to get much out of the friend, BUT when the friend tells Anna that the Vera was scrubbing the pie crust off her hands viciously, I thought, "Well, isn't that a red flag since the poison was in the pie? Couldn't she have been trying to get the poison off her hands so she can set up Mr. Bates?" I guess I can't blame Anna for not responding to that... I've seen way more TV than she has. She'll probably remember this down the line.

This business with Ms. Hughes is heart-wrenching. She has done an amazing job of portraying someone who is trying to be strong, but is so scared and everything in between. The emotion she shows on her face when Cora tells her that Downton will take care of her was enough to bring tears to my eyes. But in typical Downton fashion, all this handwringing was for naught, since she seems cancer free at the end of the episode. Is this true, or is Mrs. Hughes just telling people this because she doesn't want people to know she really does have cancer? I have my doubts, but she does seem sincerely happy, especially when she sees Mr. Carson so happy in that last scene. However, she went into the doctor's office alone, so we may not know the true truth for some time. I have a sad feeling about this and I will be very, VERY sad if she leaves us.

- I'm not even talking about the whole Matthew finally agrees to use the "Livinia money" to save Downton because we knew it was going to happen all along.
- I don't think I can take another Ethel-Isobel scene without some serious progress. I mean, cooooome ooooonnnnn... we get it, she's a hooker who wants better things for her son. Let's pick up the pace here.
- Is Daisy going to muster up some American-type sass and go after our new friend Alfred? She could use some sass and maybe a smooch or two. I hope good things happen for Daisy.
- More Mrs. Patmore please!

Is it possible that I have written an entire blog entry about Downton Abbey without mentioning Mary Crawley? (I mean other than to say Edith's dress is waaaayy better than hers?). I suppose I could say that she is probably going to bear many attacks from Super Spinster Edith as well. But will she care? Doubtful.

So glad to see the blog up and running again! And so happy Downton is back! So last episode, I'm not just trying to show off, but I actually did see the leaving at the altar bit happening. When Edith was getting dressed with her sisters before the wedding and said 'look at us, all married and happy" (or something like that) - that's what did it for me. I wasn't suspecting anything in the least before that, but when Edith said that, I figured she jinxed herself, and that it was some rather blatant foreshadowing.

So I think she needs to go to Lindon with Mrs Crawley, use her nursing skills and live it up in the roaring twenties -- or even more bold would be to go to NY and stay with her bawdy maternal grandmother! If she stays at at Downton, she will be an old decrepit spinster.

I'll say something about Mary -- so was that really the nicest thing she could muster up to say to her sisrer on her wedding day?! "Even though we haven't always gotten along, and probably won't in the future, I wish you good luck just for today" (slightly paraphrased) Jeez, break out the Kleenex for that one - what a bitch!

Looking forward to next week! Also, are you watching Girls? Great, funny show, but my god Lena Dunham is nuts! I hope her Dad doesn't watch her show.

I agree! There was definitely foreshadowing of gloom and doom for Edith, but I didn't think it would be that! Seriously, dying leaving the church would have been better for me. And you're right, Mary is such a raving beeeyotch! Why was I rooting for her and Matthew again?

I'm disappointed in the blatant lack of bithery from Edith towards anyone in the last episode. She needs to let that loose... I'm waiting!

I do watch Girls. I was obsessed all last season but have not caught up on the first couple of episodes of this season yet. I will! And we shall discuss!

Thanks for the comments!